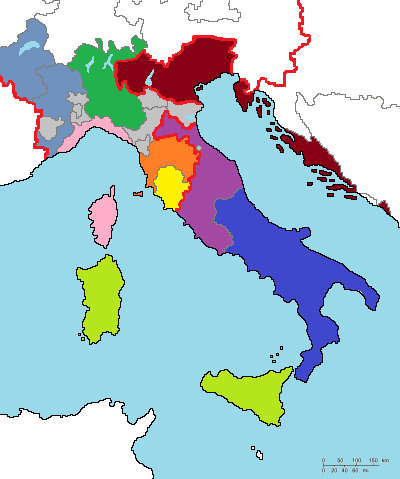 When he crossed The Alps at the head of a huge army, Charles VIII, king of France, must have known that any invasion of Italy would mean fighting both Ferdinand II King of Spain and the Holy Roman Emperor Maximilian I as both monarchs were the feudal overlords of territories in Italy. The Spanish House of Aragon had ruled Southern Italy, Sardinia and Sicily since the 13th Century and the King of Spain's cousin was the current King of Naples.

Similarly Maximilian , as Holy Roman Emperor, was the feudal overlord of the most powerful duchies and city states in Northern Italy, including Milan, Savoy, Genoa, Ferrara, Mantua, Florence and Siena. Only the Republic of Venice and the Papal States in Central Italy were free of direct imperial or Aragonese rule but even these independent territories still had to be careful not to upset their powerful neighbours.

In the light of this, Charles' invasion might seem foolhardy in the extreme but the French too had their allies. The rebellious Ludovico Sforza, Duke of Milan, longed to be free of the imperial yoke whilst the influential Cardinal Guiliano della Rovere wished to settle his long standing feud with the Spanish Pope Alexander VI. These treacherous princes welcomed the French with open arms but they were quickly shocked by the ferocity of Charles' attack. The use of 'godless' cannon and the barbaric sack of Mordano in the north and Naples in the south finally turned the whole of Italy against the French.

The mercurial Duke of Milan, the Papal States and the Venetian Republic put aside their various differences with Spain and the Holy Roman Empire to form The League of Venice. After the bloody but indecisive Battle of Fornovo [1495] The French were forced to abandon Northern Italy, albeit temporarily, and in 1498 the French garrison in Naples surrendered.

Shortly after these defeats, the 28 year old Charles was killed when he accidentally hit his head on a low doorway but the death of the French King did not put an end to his war.