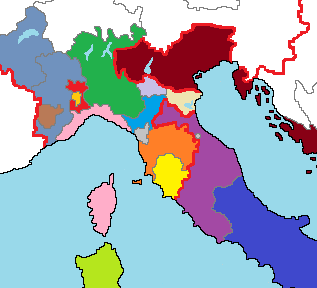 The States of Northern Italy in 1499

When the childless Charles VIII died, the crown of France passed to his cousin Louis XII who was determined to succeed where his predecessor had failed. The new French king's claims to any Italian throne were even more tenuous than those of Charles VIII but in 1499 Louis crossed The Alps and sacked a number of Milanese towns with savage ferocity. The terrified citizens of Milan quickly surrendered their city to Louis who sent the deposed duke Ludovico Sforza back to France in chains.

Louis now prepared to conquer Naples but he was determined not to repeat Charles' mistake of trying to fight both Spain and the Holy Roman Empire at the same time. Louis therefore persuaded the Spanish king Ferdinand to abandon his Neapolitan cousins, as well as his daughter's Hapsburg in-laws, and sign the Treaty of Granada [1500].

This secret treaty declared that Spain and France 'had all enemies in common except the Pope' and under its terms Ferdinand agreed to give Louis a free hand in Italy provided the French shared the conquered Kingdom of Naples with Spain. Louis readily agreed to this but such a rash bargain would be the ruin of all his ambitions.

Ignorant of his own folly, Louis proceeded with his invasion of Naples and by 1502 a joint Franco-Spanish army had seized the whole of Southern Italy. For a while it looked as if Louis' victory was complete but the Spanish suddenly turned on their French allies and defeated Louis at the Battle of Garigliano [1503]. The rout forced Louis to abandon the whole of Southern Italy, which became an integral part of the Spanish kingdom, but at least the French still held Milan.

By the Treaty of Lyon [1504] Louis ceded Naples to Spain whilst Ferdinand recognised the French conquest of Milan. A second treaty, the Treaty of Blois [1504], pacified the Holy Roman Emperor by promising to marry Maximilian's grandson, the future Charles V who was also the grandson of the King of Spain, to the King of France's daughter.

Though this marriage never took place (Charles was only four years old at the time) the two treaties produced an uneasy peace which would last for the next five years. However during this brief lull in the fighting, the kaleidoscope of European alliances shifted again.

By 1508 the new Pope Julius II (who as Cardinal Guiliano della Rovere had persuaded Charles VIII to invade Italy a decade earlier) had become fearful of the resurgent power of Venice. Julius therefore persuaded Ferdinand of Spain, Louis of France and the Emperor Maximilian to unite against the Venetian Republic. Their alliance was signed in the French town of Cambrai and the new league promptly crushed a Venetian army at the Battle of Agnadello [1509] but within two years the members of the League of Cambrai were at each other's throats once more. 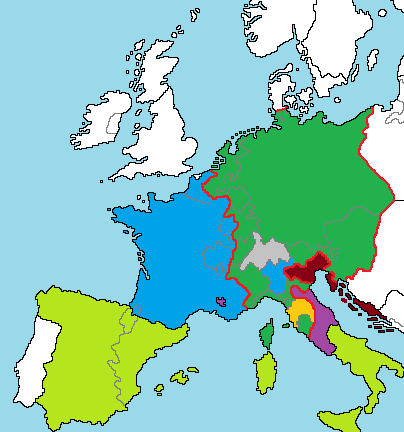 Italy after the Battle of Garigliano [1503]