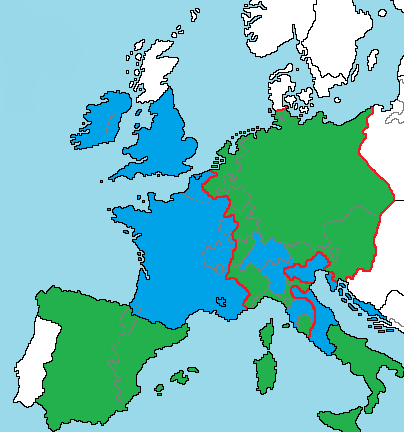 The War of the League of Cognac Alliances

The destruction of the French army at the Battle of Pavia [1525], and subsequent Treaty of Madrid, left Charles V the master of Western Europe but the new Pope Clement VII was deeply alarmed by the unfettered power of the young Hapsburg emperor.

Once the French king had been released from Spanish captivity, Clement released Francis from his obligations under the Treaty of Madrid and contacted all those who wished to be free of imperial power. The new alliance of Charles V's enemies included France, the Papal States, Venice, Florence and the ever rebellious Sforza Dukes of Milan. England joined briefly but left when the alliance was signed at Cognac instead of London as Henry VIII wished.

The War opened with The League of Cognac's armies seizing the imperial city of Lodi but in reply a Hapsburg army expelled the Sforzas from Milan.

Further south, the emperor's' Italian allies, the powerful Colonna family, seized control of Rome but were bribed to hand the city back to the pope. An Imperial-Spanish army, led by the French rebel the Duke of Bourbon and the mercenary captain Georg von Frundsberg, promptly besieged Rome but after dispute over pay the imperial commanders lost control of their men and the mutinous landsknechts sacked the city.

The savage Sack of Rome [1527] by imperial troops shocked the whole of Western Christendom and at last Henry VIII, who now wished to be rid of his Spanish Queen Catherine of Aragon in order to marry Anne Boleyn, was persuaded to join the League of Cognac. In the summer 1527 a French army marched on Naples, the imperial capital of Southern Italy, but diseases and Neapolitan canon decimated Francis' forces. The siege collapsed and with it Francis' dreams of conquering Italy.

Unusually the armistice was negotiated by two queens, Louise of Savoy (Francis' mother) and Margaret of Austria (Charles' sister-in-law). The resulting Paix des Dames effectively ended the war but Florence continued the fight until her armies were soundly beaten at the Battle of Gavinana [1529]. The following year, after a brief siege, Florence too surrendered and though the War of the League of Cognac was now over, the wider Italian Wars lumbered on for another two decades.