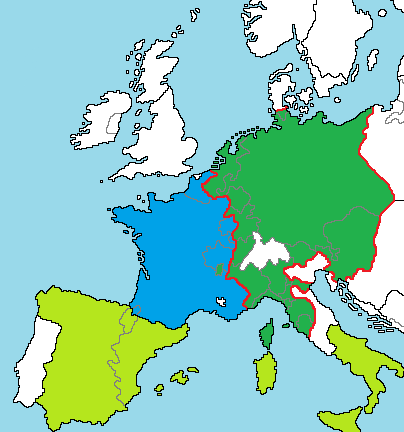 Europe at the Abdication of Charles V

Francis and Charles continued their personal struggle for control of Western Europe for the next twenty years and war broke out again in 1536, 1542 and 1551.

After Francis' death in 1547 his son Henry II continued the fight but the world was changing at an ever increasing pace. The Reformation was redrawing the map of Europe along religious rather than dynastic lines and the death of Henry II in a jousting accident plunged France into a maelstrom of religious strife.

Charles too was growing old. Crippled by gout he retired to a monastery in 1556 and divided his vast empire between his son Philip II, who became king of Spain, and his brother Ferdinand who became Holy Roman Emperor.

Whilst Protestant and Catholic claimants to the French throne slaughtered each other, the successors of Charles V consolidated the Hapsburgs' grip on Western Europe.Hapsburg princes ruled Spain until 1714, Naples until 1734, the Holy Roman Empire until 1807, Northern Italy until 1866 and Austria until 1918.