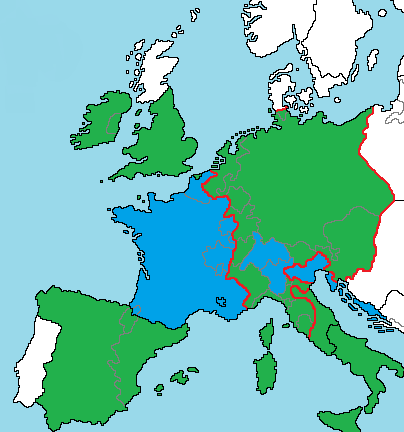 Valois & Hapsburg alliances during the war of 1521

Despite the French King Francis I's best efforts to secure his own election to imperial throne, Charles V, the Hapsburg King of Spain, duly succeeded his grandfather as Holy Roman Emperor. This not only created a dangerous political situation it fuelled the personal loathing Francis and Charles had for each other. From now on, victory or defeat in the Italian Wars became a matter of personal honour. Francis made the first move by invading Hapsburg Flanders in the north and Navarre in the south.

The French king had counted on the support the pope Leo X, who had backed Francis' candidacy for the imperial throne but with the Papal States also surrounded by Hapsburg territory Leo lost his nerve and sided with Charles V. To make matters worse for the French, the English king Henry VIII, who was married to Charles V's aunt, also joined the war on the imperial side. Francis was now fighting in the north, east, and south and imperial victories at the Battles of Bicocca [1522] and Sesia [1524] drove the French out of Italy.

With Milan and the rest of Lombardy back under imperial control Charles went on the offensive and backed the rebel French Duke of Bourbon in an invasion designed to depose Francis. Bourbon invaded Provence and laid siege to Marseille in the summer of 1524 but the city held firm and the approach of Francis' relieving army caused Bourbon to lose his nerve. Bourbon abandoned his artillery and retreated back into imperial Lombardy with Francis in hot pursuit.

With plague ravaging Milan the imperials abandoned the city to the French leaving the garrisons at Pavia and Lodi as the only sizeable Hapsburg forces in Northern Italy. Francis quickly besieged the imperials at Pavia but he hadn't the manpower to do the same at Lodi. Whilst the French froze in their trenches, Charles ordered his favourite mercenary captain, Georg von Frundsberg, to raise a new army to relieve Pavia and the result was a crushing defeat for the French. However, not even the capture of the French King on the battlefield could end The Italian Wars.