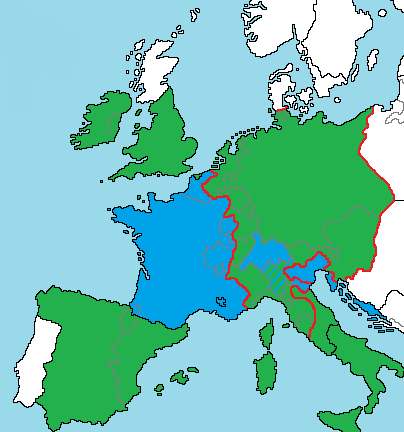 After the League of Cambrai's victory over the Venetians at Agnadello [1509] the tensions between the former enemies proved too great and the alliance collapsed. Louis declared war on Pope Julius who promptly swapped sides and joined his old enemies the Venetians. In 1510 Julius formed The Holy League with the Holy Roman Emperor Maximilian and in 1511 this alliance was extended to include the ageing Ferdinand King of Spain and the young, recently crowned king of England Henry VIII.

The Holy League succeeded in ousting the French from Milan and restored the treacherous (and deeply unpopular) Sforza dukes. A French relief force was trounced at the Battle of Novara [1513] and Louis' armies were also been driven out of Navarre by the Spanish. In the north Henry VIII, who'd entered the war with enthusiasm, had defeated the French at the Battle of the Spurs [1513]and captured the Flemish city of Tournai.

In the face of these defeats, the desperate Louis tried to neutralise the threat from England by reviving France's Auld Alliance with Scotland. Louis encouraged the Scottish king James IV to attack his English brother-in-law and though James was defeated and killed at the Battle of Flodden [1513], Louis now succeeded in persuading Venice to swap sides.

Though Louis died in 1515, his successor Francis I continued the war and a combined Franco-Venetian force annihilated the Duke of Milan's army of Swiss mercenaries at the Battle of Marignano [1515]. This battle ended the power of the legendary Swiss pikemen to dominate battlefields and the 'Eternal Peace' between France and Switzerland remained in force until the French Revolution. Francis' victory left the French in control of Milan and most of Northern Italy and when Emperor Maximilian tried and failed to raise an army to take back his lost empire in Italy he was forced to sign a humiliating peace.

The Treaties of Noyon and Brussels divided imperial possessions south of The Alps between France and Venice and whilst this was not a situation that the Holy Roman Emperor could tolerate, Maximilian was growing too old for war. He died in 1519 and his grandson, who had already inherited the Kingdoms of Spain, Sicily, Sardinia and Naples from his Spanish grandparents, was quickly elected Holy Roman Emperor. The encirclement of France by the Hapsburgs, something that three kings of France had fought so hard to avoid, was fast becoming a reality.